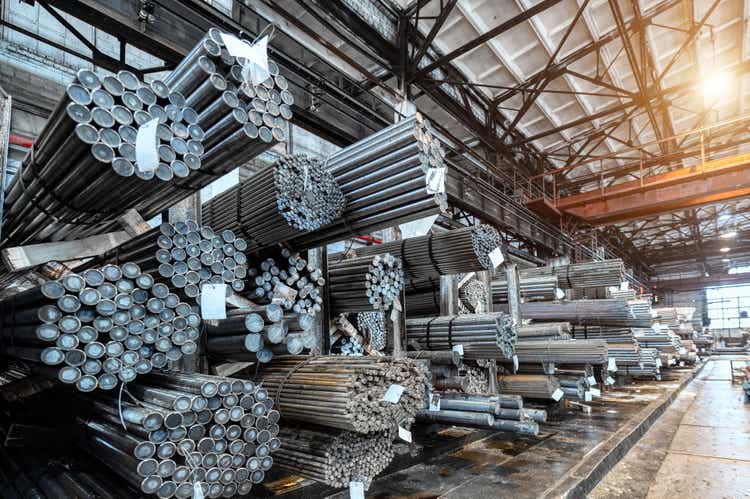 The iShares Latin America 40 ETF (NYSEARCA:ILF) primarily gives exposure to Mexico and Brazil. In doing so, it is rich in commodities but also fairly well exposed in the rising rate environment. Exchange risks are fortunately limited and exposure to raw materials come with a low multiple, reflecting investors’ belief that the commodity cycle is in its final stages. With geopolitical factors likely to continue to support energy prices and major commodity exposures already quite reduced, the ETF looks quite attractive.

The key assets of the ILF are as follows.

We see some familiar names, with 11.9% in Vale (VALE) which is primarily iron ore exposure. Below are various instruments related to Petrobras (PBR), and below are Latin banking and telecom exposures.

The sector allocation shows a fairly strong inclination towards financials with an allocation of 28%. As in the rest of the world, insurance and financial banks benefit from higher rates. In insurance, it’s because their fixed income portfolios shift to higher-yielding, short-term fixed income instruments, which supports the performance of their reserve funds. In the banking sector, which is more strongly represented in the ILF allocation, savings rates continue to be lower than lending rates and the interest income gap increases in the banking sector.

Material exposure is for base materials like iron ore. The iron ore situation is relatively beleaguered due to issues in China, where their economic productivity, particularly in construction and real estate, has been a major driver of steel and iron ore prices. China’s woes weigh on the price of iron ore. On the bright side, energy development is going to require steel, and the order books for these industries are piling up. Iron ore prices are about as low as it gets and their average TTM levels are fairly normalized to 5-year averages.

Energy will continue to be supported by the conflicts in Ukraine and the dislocation caused in the markets. Finally, consumer staples, which are also largely represented by Mexican businesses, will withstand a recession and worsening economic conditions, if those conditions actually deteriorate.

The good news is that currency risks are quite limited.

Geographically, the main exposures are Brazil and Mexico. The peso is relatively dollarized, even implicitly due to currency exchanges related to remittances as well as currency exchanges related to oil resources, which must cross the border in its various stages of processing. From an economic perspective, Mexico is also more stable than many other countries, with no boom-bust cycle since Mexico refrained from post-COVID-19 stimulus. Brazil is also doing quite well on the real side, as demand for commodities is supporting this currency, as well as the rate hike regime. We note a certain political risk with Brazil as Bolsonaro’s mandate could come to an end, to be replaced by Lula. This could mean a reversal of monetary tightening. It could also be a cause for political unrest, as Bolsonaro could reject an election result if won by a narrow margin. There are also questions about Petrobras, which is being used as a political scapegoat for inflation, and could be stifled by government intervention with things like windfall taxes.

Nevertheless, when it comes to sector exposures, either the worst is behind these sectors or the sectors are likely to be resilient. Therefore, a P/E of less than 7x and a return of more than 10% suggests that the ETF’s price may be above what is reasonable. Without currency risks, more specific concerns seem quite limited thanks to diversification. We love the ILF.

Why Alcoa, Chevron and Freeport-McMoRan stocks sizzled on Friday